Nippon Suisan Kaisha, Ltd. (Nissui) has consolidated Hakata Marukita Suisan Co., Ltd. and Tokyo Kitaichi Co., Ltd. Utilizing the synergy created by the addition of these two companies, which are well-established brand names renowned for their superior cod roe processing skills, the Group's cod roe business is expected to shift from the existing raw fish roe business to a business more oriented toward processing. The Group, as it eyes possible expansion into the overseas markets, is set to enlarge its entire cod roe business as well as increase its added value.

Hakata Marukita Co., Ltd., whose business was assumed by Hakata Marukita Suisan Co., Ltd., has been renowned for its production and sales of karashi mentaiko (Alaska Pollack roe spiced with powered red pepper) and has been ranked highly in Fukuoka, where nearly 70% of the nation's karashi mentaiko is produced. The company's brand, "Hakata Ago-otoshi," which is made by marinating the roe in the company's secret marinating sauce, has been warmly received by consumers and was awarded the Minister of Agriculture, Forestry and Fisheries Award of Japan at the 1995 National Processed Marine Food Exhibition. "Hakata Ago-otoshi (jaw-dropping)" was named for the product's "jaw-dropping" delicious taste.

Tokyo Kitaichi Co., Ltd., on the other hand, is a company with a processing plant in Otaru, Hokkaido that manufactures and processes marine products. The "Otaru" brand is particularly popular as a brand in Hokkaido, where the sea's bounty is plentiful, and maintains an edge in the sales of tarako (salted Alaska Pollack roe) and karashi mentaiko. Plans are under way for additions to their Hokkaido plant (work is scheduled to commence in April 2010), which will enable increased production of items intended mainly for the seafood products counters of volume retailers.

The consolidation of these two companies was conducted as a part of a strengthening of supply-chain functions from raw materials procurement to product sales that utilizes "Global Links" and "Local Links," which is in line with the Medium-Term Management Plan, the "New TGL Plan (FY 2006 - FY 2011)," begun in 2006, and which will contribute substantially to the enhancement and expansion of the processing and sales segments of the cod roe business.

A strength of the Nissui Group has been its resource access to Alaska Pollack, which serves as a raw material for fish paste (surimi) products, fish ham and sausages. The Group has been building a vertically-integrated business structure for white fish, encompassing everything from resources to the final product. Regarding the cod roe business also, which handles the roe of the Alaska Pollack, the addition of the two companies'product lineup, processing technologies, and brand values is expected to optimize the synergy of the Nissui Group.

Catch quotas are determined on the basis of scientific studies conducted prior to the fishing season and this year marks the fourth consecutive year in which the U.S. quota has been reduced, which is due to the fact that Alaska Pollack is currently in between dominant year are joined together (years in which greater numbers of certain fish species are born compared to the preceding and following years) and changes having occurred in other environmental factors such as water temperature. Meanwhile, the quotas for Russia have been rising as a result of Russia being favorably judged on the conditions of its resources. The catch quota for the seas off Japan has been fixed at 225,000t for the year.

Changes in the catch quota of Alaska Pollack

Changes in production of cod roe

Additionally, cod roe production in the U.S. has also been on the decline in line with the declining Alaska Pollack quota for the U.S.

Alaska Pollack fishing in the U.S. has been certified by the MSC (Marine Stewardship Council), which entails strict control by the MSC over its catch quotas, fishing seasons and fishing methods.

The MSC is an international organization promoting sustainable fishing that gives due consideration to the marine environment. MSC certification is granted to fisheries that have passed rigorous screening based on the three principles of "sustainability of resources," "conservation of the ecosystem," and "an effective system for managing marine resources." Furthermore, in order for products from the certified fisheries to be sold under the MSC label, the products must satisfy the CoC (Chain of Custody) standard for seafood traceability at every process from processing to distribution.

"Hakata Ago-Otoshi" has satisfied the CoC standard and has been given the MSC label, as a product using U.S. fish roe from an MSC-certified fishery. The MSC label is an easy-to-spot label indicating that the product gives due consideration to sustainability and the marine environment, and assures the consumer that he or she is making a responsible choice in purchasing the product. 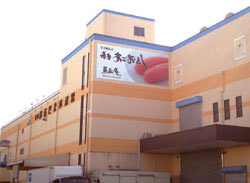 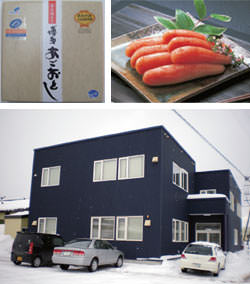 The Otaru Plant of Tokyo Kitaichi Co., Ltd. in Hokkaido

Nissui secures 20% of the catch quota of Alaska Pollack in the U.S.

The Nissui Group has been building a staunch pipeline in order to fortify its access to Alaska Pollack through the Global Links.

As means to ensure a stable supply of whitefish in the bountiful waters of the U.S., the Group established UniSea, Inc. in 1974 as a base for the procurement and a processing and production base for marine resources. In 2006, it reinforced its resource access by consolidating Glacier Fish Company, LLC (GFC), with its fleet of factory trawlers. The catch quotas of the two companies put together account for nearly 20% of the entire quota of Alaska Pollack in the U.S. 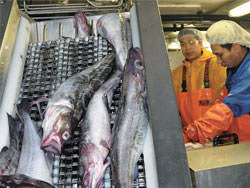 UniSea, Inc. has a processing plant for Alaska Pollack in Dutch Harbor, Alaska. GFC owns the factory trawlers, Alaska Ocean and Pacific Glacier, equipped with processing facilities comparable to those on land, which enable them to process their catch of Alaska Pollack on board while they are still fresh.

Russian cod roe is acquired through Yokohama Trading Corp., Ltd., which was consolidated into the Nissui Group in 1992. The company is expert in trading with Russia and has been steadily increasing its share in the import market for Russian marine products.

Cod roe is mainly traded using the auction (bidding) method. Auctions are held from March to April for American cod roe in Seattle and for Russian cod roe in Busan, South Korea. Users from Japan and South Korea are the main bidders at these auctions and Yokohama Trading Corp., Ltd. participates in the Busan auctions in order to procure Russian cod roe.

In the U.S., sales are also conducted between Group companies and between companies with long-term trading relationships. In addition to these auctions, the Nissui Group also purchases a portion of its cod roe through bilateral transactions.

There are many grades of cod roe, depending on the roe's size, maturity, and color; and the presence of tears in the egg membranes and other factors. The price of the roe is determined on the basis of the roe's maturity and the presence/absence of defects in the egg membrane. The most valuable form of the cod roe is "mako," which is the whole matched pair of roe masses without any defects.