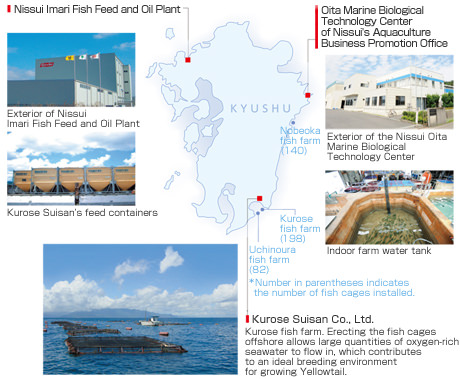 Since June 2009, Kurose Suisan has been marketing its seasonal product, Kurose Wakaburi, which is intended for consumption in the summer.

The Kurose Wakaburi brand has been made possible through the development of artificial seedling technology, which involves the early collection of eggs from farmed broodstock. This early-collection artificial seedling technology was jointly developed by the Oita Marine Biological Technology Center of Nissui's Aquaculture Business Promotion Office (Saeki City, Oita Prefecture) and the Fisheries Research Agency using water tanks with control over photoperiods (length of light and dark periods) and water temperatures. This technology has made it possible to harvest 2-year-old fish with good flesh quality a few months earlier, and by mating these fish with the 2-year-old fish raised from large wild mojako, it is now possible to produce Yellowtail with good flesh quality even in the summer months.

As farmed Yellowtail, similarly to wild Yellowtail, lay their eggs during May and June when they are 3 years old, flesh quality tends to deteriorate due to the low fat content in the post-spawning summer season. By offering fish with good flesh quality even in the summer months, which has traditionally been the off-season for Yellowtail, Kurose Wakaburi has been well received by numerous customers such as sushi shops, restaurants and retailers, and is increasing summertime shipment. In other words, it is now possible to ship Yellowtail with consistent quality year-round.

Kurose Yellowtail renowned for consistent taste, safety and security, as well as high-quality

Powdered formula feed, which has been formed into EP (expansion) pellets, is fed to Kurose Yellowtail. Nissui's Imari Fish Feed and Oil Plant (Imari City, Saga Prefecture) coordinates with Kurose Suisan and the Oita Marine Biological Technology Center to develop and produce more than 10 different types of feed for Yellowtail according to its stage of development.

Unlike live bait*1, the use of EP pellets makes it possible to adjust the ingredients to create the right formula to suit the fish's stage of development, which in turn ensures the breeding of adult fish of consistent quality. Moreover, as the feed has been heat-treated, it is capable of reducing the risks of live bait-borne fish diseases.

Furthermore, adjusting the density and controlling the sinking rate of the EP pellets according to the feeding habits of the Yellowtail ensure that the feed will be consumed almost entirely, which contributes to an eco-friendly feeding process that does not pollute the marine environment. 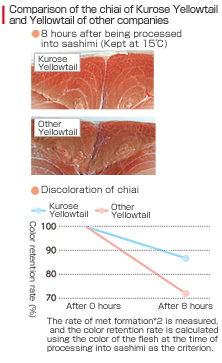 During the period immediately prior to harvesting, the fish are fed the functional feed, "MARBLESS." MARBLESS contains natural ingredients such as red pepper that prevents the chiai from turning into a brownish color over time and helps it to keep its fresh red color. Conventional farmed Yellowtail tends to be excessively fatty with an unpleasant texture, while Kurose Yellowtail that has been fed MARBLESS has just the right amount of fat content and firm flesh.

Although the main studies on fish diseases are conducted by the Oita Marine Biological Technology Center, routine prevention measures are also taken by Kurose Suisan by having divers dive into the fish cages and observe the health conditions of the fish underwater. If a sick fish is found, it is immediately taken to the fish disease lab to undergo tests, after which the most suitable medication is selected. The Yellowtail's health conditions are monitored under the supervision of a dedicated veterinarian.
In terms of shipment, the fish always undergo tests for residual chemicals and are harvested only after confirmation that there is no chemical residue. Additionally, Nissui's system for recording the feeding and medication of each fish cage ensures traceability, allowing the feeding history of the Yellowtail to be traced.

The adult fish are then harvested by a processing vessel tied to the fish cage using a brail net and immediately tossed into the processing machine where they are killed instantly. The processed Yellowtails are then plunged into the belly of the ship, which is loaded with salt water frozen to a sherbet consistency, where they are bled and cooled simultaneously. The fine sherbet ice prevents bruising of the flesh while instantly lower the body temperature of the fish. The sherbet ice has also been prepared with a sodium concentration similar to sea water, which prevents deterioration of the flesh from changes in osmotic pressure.

The post-harvest bleeding process results in massive amounts of blood as byproducts, and if this blood were released untreated, it would cause serious contamination of the water in the bay. Therefore, Kurose Suisan treats the blood through microbial decomposition at the effluent treatment facility built adjacent to the processing plant and releases the purified water into the river.

The Yellowtail, after being bled and cooled, is then immediately transported from the ship to Kurose Suisan's processing plant. The plant was awarded EU Hazard Analysis Critical Control Point (EU-HACCP) certification, which is the strictest criteria for processing plants in the world, from Miyazaki Prefecture in 2007 after undergoing renovations and giving its employees the required training.

Currently, Kurose Yellowtail is sold in countries throughout Europe through Nissui Group distributors. In March 2011, Kurose Suisan acquired ISO22000:2005 (Food Safety Management System) certification, and together with the EU-HACCP, has been striving to improve its level of food management. 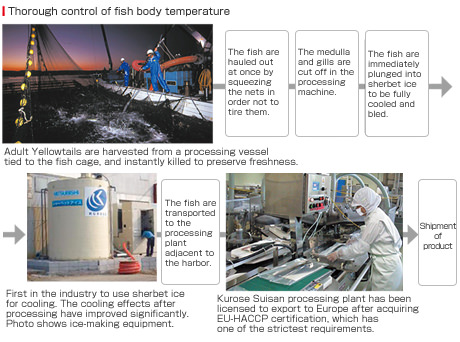 Kurose Yellowtail utilizes the networks of the Nissui Group to the maximum extent, including the Oita Marine Biological Technology Center, which is responsible for research into fish diseases and fish breeds and system development, and the Imari Fish Feed and Oil Plant, which develops and produces feed. Additionally, the main ingredients for fish feed, i.e. powdered fish and fish oil, are procured from Nippon Suisan America Latina S.A. (N.A.L.) in Chile.

Fish catches have been leveling off throughout the world and expectations are high for the aquaculture business. Under the Medium-Term Management Plan 2014 (MVIP; 2012?2014), Nissui intends to raise the presence of the aquaculture business by giving consideration to the sustainable utilization of marine resources and the preservation of the global environment and switch from live bait to low-powdered-fish feed from an environmentally friendly standpoint, as well as engage in the production of artificial seedlings from the perspective of sustainability. On April 5, Nissui added Kaneko Sangyo Co., Ltd. (Karatsu City, Saga Prefecture), which is engaged in the aquaculture and feed businesses, to the Group and hopes to take advantage of the further synergy created by this addition.