Our Marbless feed for yellowtail has the following three main effects:

Farmed yellowtail, which consumers felt was too fatty, used to not be very popular. We discovered that compared to yellowtail ingesting a comparable amount of fish oil, yellowtail fed feed with red pepper developed just the right amount of fat, so we hit on the idea to add red pepper to the feed.
Because it reduces the amount of marbling("marble less"), we named the product Marbless.
After extensive on-site testing, we also discovered that Marbless helps improve firm texture and delays fading of dark meat.
Marbless is a registered patented product (patent nos. 3895133 and 4382795). 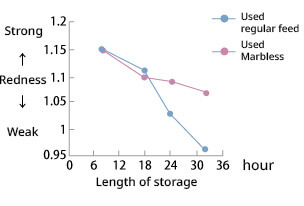 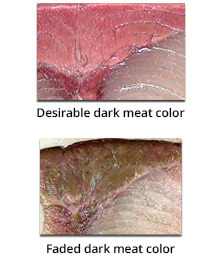 In our research, we focused on identifying some substance in our daily diet that would help improve yellowtail meat in order to enhance its innate tastiness.

The main ingredients of Marbless are fish meal and fish oil sourced from within the Nissui Group, to which we added red pepper, Marbless is manufactured at Farm Choice Co.,F45 Ltd.'s Imari fish feed and oil plant and used by Kurose Suisan Co. Ltd., which farms Kurose yellowtail. Kurose Yellowtail which has been fed Marbless is spiked (Japanese ikejime techniques) immediately After being harvested and quickly processed before being sent on its way to customers' tables.