Nissui has developed and manufactured imitation foods for several years, producing not just traditional surimi staples like chikuwa, processed fish cake with tube-like shape but also kanikama imitation crab sticks and other products to add new value. Imitation foods need to faithfully reproduce the look and texture of muscle fibers of marine animals like crabs or scallops.
To make this possible, Nissui delved into research for manufacturing imitation foods, taking the dual approaches of research on marine proteins and mechanical engineering to develop its own method for manufacturing imitation foods.
For example, we developed manufacturing technology that uses the action of acid to coagulate proteins. A salt and vinegar solution is sprayed onto surimi fish paste through a fine nozzle, causing the fish paste to coagulate instantly, after which it is formed into threads. This process, which makes use of acid denaturation on proteins to process fish paste products, is a technology developed by Nissui and the first example of its application anywhere in the world. Thanks to this manufacturing method, products have been developed which offer a more solid fibrous fish texture compared to existing imitation crab sticks. Nissui Group company King & Prince Seafood Corp has been using this technology to produce imitation lobster foods. 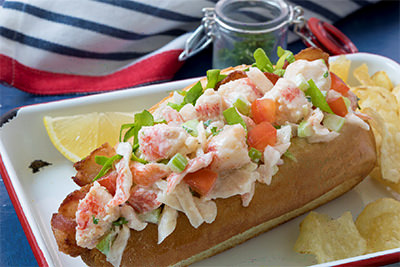 Nissui has also developed technology for manufacturing imitation foods by adapting the extortion cooking method, which uses high temperature and pressure to physically compact food ingredients. The ingredients are then processed and shaped while being extruded through a screw. Extruders are widely used to manufacture snacks, pasta and other dried foods but had been viewed as unsuitable for shaping ingredients like fish meat, which is very moist. Nissui combined an extruder with its own manufacturing system to create a method for manufacturing bunches of protein fibers 10 microns in diameter to produce imitation foods with a fiber structure similar to that of seafood. Since imitation foods made using this method are processed under high heat and pressure, their texture is not affected by reheating. SEA GRACE brand imitation foods use this technology to reproduce the realistic texture of crab and scallops. 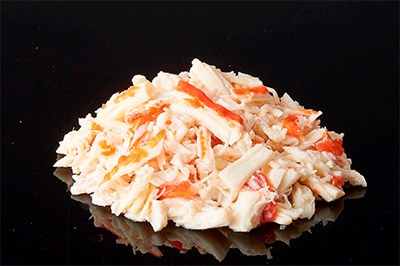 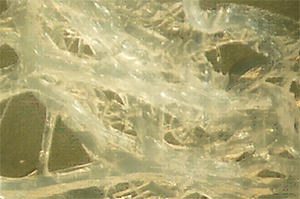 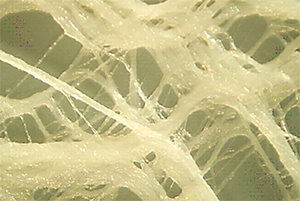 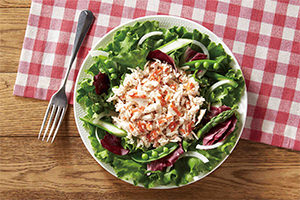 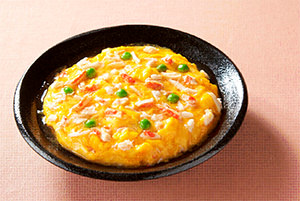