Fish oils are rich in EPA (eicosapentaenoic acid), an omega-3 polyunsaturated fatty acid (*1) which is rarely found in plant oils and animal oils other than fish. It is an essential amino acid (*2) that cannot be made in the body.
Nissui conducts R&D for processing the various properties of these marine resources into easy-to-use formats for daily health or enhancing their properties.

EPA began attracting attention as a result of epidemiological studies (*3) conducted among people in Greenland, an autonomous territory of Denmark, by Dr. Jorn Dyerberg between 1963 and 1967.

Based on these studies, it was found that

This led to a surge of interest in EPA worldwide, and various studies are being conducted.

Working with a pharmaceuticals company, Nissui began researching how to refine EPA for use in drugs in 1981.
A drug for obstructive arteriosclerosis using EPA was launched in 1990 and use of the drug was expanded to apply to hyperlipidemia (*8) in 1994.
Nissui supplies the raw material for EPA pharmaceuticals.
Research has been conducted into the physiological functions of EPA--to prevent circulatory system diseases and for its anti-allergy, anti-cancer and anti-inflammatory effects. EPA is found in drugs, health foods, food ingredients and many other applications.

Raw material sardine oil contains around 20% EPA. For medicinal grade EPA, purity must be raised to 90%. No single method can be used, so a combination of methods is needed. EPA oxidizes easily and can gradually decompose if exposed to oxygen. We overcame these problems and succeeded in mass-producing highly pure EPA.

We made further improvements and are now capable of producing higher-purity (over 96%) EPA. 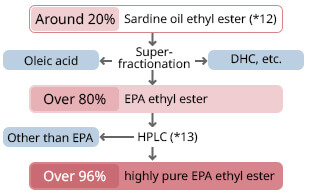 In the future, we must find ways of using finite marine resources efficiently

Given its excellent properties, we expect demand for EPA to grow.
But marine resources are finite, so managing marine resources sustainably and using finite resources efficiently and without waste are important research topics for the future.