With a view to improving the profitability and the capital efficiency of Nissui and its Group companies, as well as to promoting initiatives toward corporate social responsibility to encourage sustainable growth and the medium- to long-term enhancement of corporate value, the Board of Directors will demonstrate the major direction in corporate strategies and other matters and will place greater emphasis on supervising functions while retaining important decision-making functions.
The decision-making functions have been empowered to the Executive Officers (and Executive Committee) headed by the President & CEO, to speed up the decision-making process and to further separate supervising and execution.
Furthermore, in addition to the above management supervising by the Board of Directors, Nissui has adopted the governance structure of a company with an audit & supervisory board, based on its belief in the effectiveness of an audit system over management comprising four Audit & Supervisory Board members including Outside Audit & Supervisory Board Members who are independent of management. 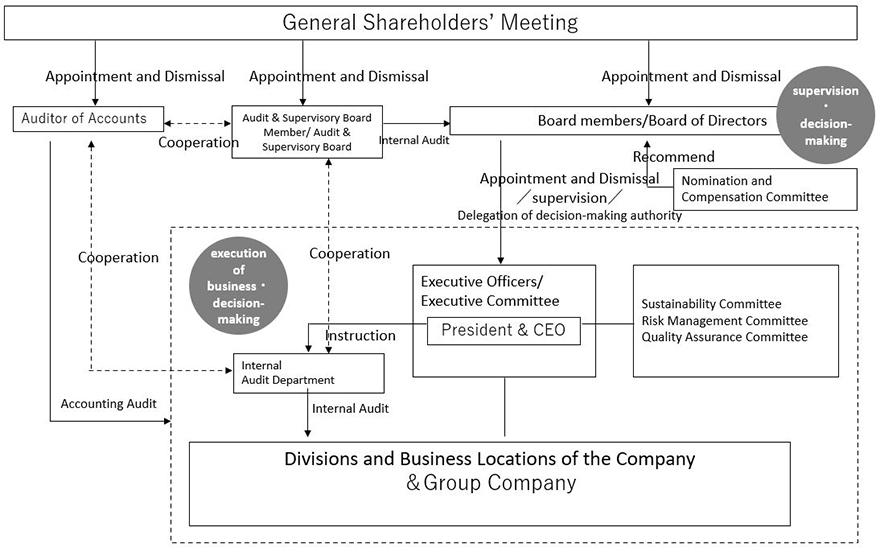 Board of Directors, Board Members

An executive officer system was adopted (on June 25, 2009) to carry out even more flexible and efficient business operations. The Executive Committee consists of Executive Officers who have been appointed by the Board of Directors, and hold a meeting, at least once a month, in principle, to make timely and appropriate decisions and share information regarding major business execution upon sufficient and multifaceted deliberations, in an effort to promote the sustainable growth and enhancement of corporate value of Nissui and its Group companies.